Continuing along with National Craft Beer Week and the desire to drink local beers, I picked up a growler of Hamburg Brewing Company’s Boomenater.  Hamburg Brewing Company is located in the Town of Hamburg, NY, about a 20 minute drive south and a bit east of downtown Buffalo.  I have heard from many people that the tap room is a wonderful drinking space with a great atmosphere.  To date, I have not been able to visit the brewery myself, although I have certainly had numerous Hamburg beers at local festivals.  I plan to visit Hamburg Brewing Company this Sunday, May 17th, for their “Farm to Pint” event.

Boomenater is billed as a German style bock.  There is some amazing history surrounding the birth of the “bock” beer.  Bock beer is assumed to have been originally produced in the German city of Einbeck.  In the early 1600’s, a German brewer was hired by Munich officials to make copious amounts of this beer.  Many Catholics would consumer this beer as “liquid bread” during the Lent season.  Other spinoffs of bock beer exist, including doppelbock (stronger bock) and Maibock (produced in May).

Boomenater was on tap at a local Consumer’s Beverage outlet, so I decided to give this beer a try.  I poured Boomenater into my Pilsner glass and the result is shown below. 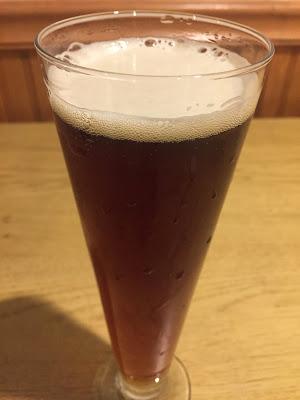 Boomenater poured a brown to ruby-brown color and displayed a half-finger head and good lacing.  The aroma of Boomenater is sweet and bready, with some nuttiness and gentle spice notes.  Neither of the hop strains used in making Boomenater, Magnum and Perle, produce strong hop bitterness or aroma.  The flavor of Boomenater is predominantly sweet malt in the front, with a clean bitterness in the background.  A bit of spice does round out the taste, including an earthy, minty feel.  Toffee and “brown ale” flavors are also noticeable.  There are quite a few different malts used in the creation of Boomenater, and their caramel impact occludes any real hop detection.  The mouthfeel of Boomenater is syrupy and full.

Overall, Hamburg Brewing Company’s Boomenater achieves the traditional bock style: malt domination balanced with subtle spice hops.  I would recommend this beer on a thermometer-challenged night in winter or spring.